Dashain i.e. Vijaya Dashami which is also known as Ayudh-Puja,is the biggest festival in Nepal and considered to be the national festival. Apart from Nepal, it is  celebrated  by the Hindu communities of the world, including India. Its actually do not have specific date. It can fall in the month of October or November depending on the “Saait”,the astrological determination.

According to mythology, this festival is celebrated to celebrate the victory of Lord Rama over Ravana by slaying a demon called Mahishasura, and the slaying of the giant Chanda-munda and Shumbha-nishumbha by Durga. Vijayadashami is celebrated as the last day of Durga Puja. Navratra, which starts from the day of Ghatsthapana, is celebrated on the last day of Ghatsthapana i.e. Vijayadashami in a lawful manner. Hindus worship various Shaktipithas from Ashwin Shukla Pratipada to Navami (throughout Navratri) and celebrating the tenth day of Vijayadashami by receiving Tika-prasad and blessings from their devotees till the full moon. According to the Navratra method, different deities and powers are worshiped every day till Navami by depositing in Ashwin Shukla Pratipada (Ghatsthapana).

What deities are to be worshiped during Navratri?

On the first day of Navratra starting from Pratipada, Shailaputri, on the second day Brahmacharyani, on the third day Chandraghanta, on the fourth day Kushmanda, on the fifth day Skandamata, on the sixth day Katsayani, on the seventh day Kalratri, on the eighth day Mahagauri, on the ninth day Siddhidatri are worshiped. Special worship of Durga and Trishakta Mahakali, Mahalaxmi and Mahasaraswati is done.

On the day of Vijayadashami, it is customary to receive red “Tika and Jamara” as offerings to Navdurga Bhavani on the occasion of Bhagwati’s victory over the demonic power and Rama’s victory over Ravan. The tenth day of Shukla Paksha in the month of Ashwin is the main day of this festival. According to religious accounts, Lord Rama killed Ravana on the same day. It is taken as the victory of truth over untruth. Therefore, this Dashmi is called Vijaya Dashmi. During this festival, people receive  Tika and Jamra and receive new blessings from their relatives and elders, eat and feed sweets according to their ability, keep the house, yard, roads, villages and settlements clean and tidy.

According to the Devi Bhagavata Mahapurana, Myrada Purushottam Shri Ram Chandra has completed the fast of Navratra and achieved victory over Ravana on the day of Dashmi. There, the nine days and nights of Ashwin Shukla Paksha are rendered as Navratravrat. The days of Navratra should not be shortened or extended as the days of this fast include rituals of certain dates and deities. The day of Pratipada is called Ghatsthapana. Navratri starts from this day. Gradually, this fast ends only in the morning on the day of Dashmi. On this day, after self-purification in the early  morning, people go to the river, stream, river banks  or any place where you can, bring clean sand or Panchamato, keep it in the tenth house or place of worship, and scatter barley or grain to preserve and produce Jamara . Barley or grain is considered an essential commodity for Vedic sacrifices.

Then Mahakali (annihilation), Mahalakshmi (protection) and Mahasaraswati (creation) are worshiped in the form of eternal power by climbing the leaves of Panchapallava in a water-filled urn. The nine durgas described according to the Brahmavaivarta Purana are: Prakriti-East, Chandika-South East, Bhadrakali-South, Sarvamangala-Northwest, Vaishnavi-North, Shivapriya-NorthWest, Jagdambika-Water, Land and Sky.

On the first day, Shailaputri, on the second day, Brahcharini, as well as Chandraghanta, Kusmanda, Skandamata, Katyayani, Kalratri, Mahagauri and Siddhidatri are worshiped.

Special function on the sixth day: The goddess is enlightened by applying oil and herbs on the branches of the vine.

Special function on the seventh day: Bhadrakali and Saraswati are worshiped. This is the day when “Dashain” is welcomed home.

Special function on Ashtami(8th Day): The tiger of Bhagwati’s ride is also worshiped by worshiping Kalratri. Khas Mashtapujak has a tradition of flying eagles. Weapons should also be worshiped.Animals like goat,he-goat,lamb etc are also sacrificed to Goddess Durga and Goddess Kali on this day.

Special function on Mahanavami(9th Day): Nine virgins are worshiped as Nava Durga and Aparajita Devi is worshiped on the morning of Dashmi. According to Hindu religion and culture, all the gods and goddesses Saptasagar, Saptadvipa, all the rivers and shrines are contained in the Ghat Kalash, which is mentioned in the Kali Purana.

In addition, Ghatkalash is found to be contained by the auspicious signs of Ashtamangal. According to Puran , Ghat Kalash is set up on tenth day tenth,Puja has to be  started by including all the deities, shrines, the holiest river channel, Sapt Sagar, Sapt Dwip etc. in it. There is a classical belief that planting wheat and barley sprouts will bring happiness, peace, prosperity and health benefits.

Special Function on Tenth Day(VijayaDashami): According to herbalists, even the incurable diseases can be cured by making the juice of the sprouted jamara left after worshiping for nine nights and receiving .Tika-prasad in the morning on the tenth day. Barley jam is called apothecary. If Jamara is placed on the forehead as a gift of Vijayadevi, the pain of the head and mental turmoil can be avoided. Jamra gives coolness.Various diseases and ailments are eradicated.

Sprouted grains provide vitamins, proteins, calcium, etc. It is considered to be very good for health. From this day till Navami, worship, adoration and prayers of Bhagwati Durga are performed in the homes of every Nepali and in the temples of the Goddess as on the first day. The Scriptures state that sacrifices must be offered every day after worship.

Specially These Days are Observed in Navaratri :

On the seventh day of Navratra, the process of bringing in nine types of Pallavas like bel leaves, rice husk, pomegranate, ginger plant, raw, sugarcane, banana etc. to the dashain house is called bringing in flowers. It is also believed that bringing new shoots into the house to welcome the end of the rainy season and autumn will get rid of various diseases. The offereing is taken to the place where Durga Puja is performed.In these nine leaves, Brahmani, Raktachandika, Lakshmi, Durga, Chamunda, Kalika, Shiva, Shokaharini and Karthiki are worshiped by invoking the sixteen items one by one respectively. On this day especially Mahasaraswati and books, copies, pens and masidani etc. are also worshiped.

On this day, the farmers go to the fields and worship the paddy with sandalwood, akshata and flowers and bring the rice ears and plants into the house. Also, on the same day, offereing(Fulpati) brought from Dashainghar of Gorkha Durbar are brought to Jamal, the capital of Kathmandu, and paraded and taken to Hanumandhoka Durbar.

On the eighth day of Navratri, special worship of Mahakali-Bhadrakali is performed. On this day, it is customary to worship the goddess Bhadrakali (who has millions of vaginal powers). According to Devi Bhagavata, this Bhadrakali is also said to have originated on this day to destroy the sacrifice of Daksha Prajapati. After worship, goats, chickens, ducks, calves, etc. are sacrificed to this goddess. These days, people offer sacrifices to their family gods, deities, and local deities. Vegetarians offer coconuts, cucumbers, bananas, gherkins, etc.The temple of Taleju Bhavani in Kathmandu is also open to the public on this day,which remains closed all other days in a year.

On the same day, in the main chowk of Dashainghar (Hanumandhoka), 54 bullocks and the same number of goats are sacrificed to Taleju Bhavani.. Many people from this day onwards worship the weapons used in agriculture and immerse themselves in Dashmi. There is a lot of discussion about weapons in the Vedas.

Shivaji and Rudra, the gods of the mountains, are all armed. Navdurga Bhagwati has weapons in all 18 hands. Worshiping weapons in honor of Bhagwati is scriptural. Hindus are non-violent, but when the enemy tries to destroy the nation, society and culture, they are ready to take up arms not only. Similarly, in various Durga temples of the country, along with pompous worship, sacrifices of buffalo and goats are also offered. About 1,300 buffalo  and 400 goats are sacrificed at the Ningalasheni temple, a major powerhouse in the far west.

On the ninth day of Navratri, Goddess Siddhidhatri is especially worshiped. On the same day, worship of Vishwakarma is also performed by sacrificing tools, weapons and vehicles in the morning. On this day, in addition to other poojas, especially  girls from two to ten years of age are also worshiped. Sacrifice means to give up work, anger, greed, lust, envy, jealousy, hatred, deceit, hypocrisy, these are the ten kinds of disorders that captures human soul from being free.

The person suffering from the disorder is full of lust, angry, greedy, fascinated, drunk and envious. The offerings of Nava Durga are meant to remove these vices and bring happiness, peace and prosperity. The symbol of work is Boka(He-goat) , the symbol of anger is Ranga(The Buffalo), the symbol of greed is Veda(Sheep) the symbol of Envy is chicken and duck. As a result of these representative characters, human beings develop sexuality, anger, greed, lust and arrogant malice. 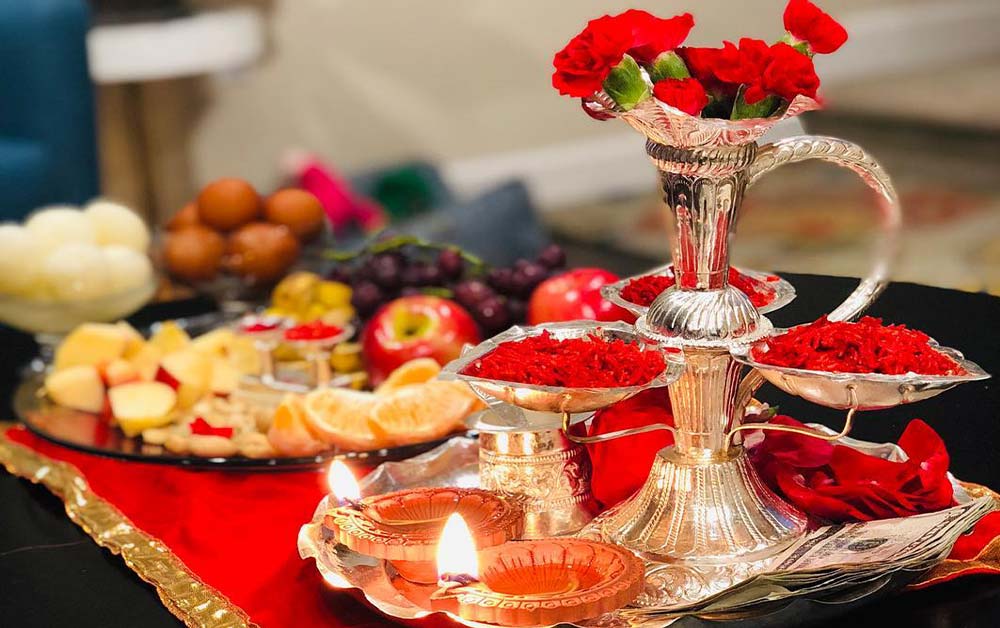 It is a classical belief that such evil spirits should be taken to the temple of Nava Durga and offered. But people began to sacrifice those representative characters. Similarly, goats and bullocks are sacrificed in various Durga Bhagwati temples of the country. Around 100 bulls and 50 goats are being sacrificed at the Udayadeva temple, one of the major Shaktipiths in the far west.

There is a religious belief that no one can oppress (conquer) by doing so. After that, while reciting the following mantras, sprinkling sandalwood, akshata, flowers, apologizing, Durga Bhagwati and other deities should be immersed and picked up and kept elsewhere: Worship Chaiv Najanami Kshamyatan Parmeshwari. After this, the idols of the Goddess and the Navapatika are recited in Baja, Gaza or Vedic mantras and taken to the reservoir.

Then Bhagwati’s offerings is received by placing a rice grains  mixed with avir(red Color) and curd on her forehead and jamara on  head. Then the family goes to relatives and dignitaries to receive blessings. The blessings main manta is :

Meaning, Longevity of life like Dronaputra Asvatthama,who is believed still to be alive after million years in Hindus myth, Get wealth like Dasharatha Raja,the richest king. Destruction of enemies like Lord Rama’s enemies are destroyed, Aishwarya like Nahus Raja,he was famous and most praised king. Dynamism like Pavanpurtra Hanuman,the god of Strength. value like Duryadhana,who was praised and respected by all.Valor like Suryaputra Karna,who was the biggest and greatest warrior in Hinduism, strength like Balaram,Truth and dedication like Kunthi’s son,the five Pandavs.Blessings are taken from the devotees so that you may attain such knowledge and fame as Lord Narayana.